Over the course of eight weeks, I descended into the cool, concrete basement of Modern Art Oxford (MAO) for two hours at a time, leaving behind the buzz of summer and any trace of mobile service or WiFi. Here I was welcomed by a group of local artists, all women, tinkering with different biodegradable materials. Each artist brought her own energy, experience, and skills to an experimental ‘artistic response to climate change’. The ebb and flow of practices and ideas evolved into Continuing Bodies – a feature of the upcoming exhibit Future Knowledge. Located in Wytham Woods, the piece is a collaborative interrogation of climate change and anthropogenic relationships with the environment using biodegradable materials.

I assumed the hybrid role of journalistic observer and participating artist, dividing the project into four phases to outline the process: I. Initiation, II. Experimentation, III. Infrastructuring, and IV. Installation. This is to allow the reader to trace the thematic strands, perspectives, dialogue, and skills that ultimately coalesced into the striking installation now standing in Wytham Woods. Each section draws on my own notes and experience, along with photos and interview excerpts from each of the participating artists and lead curator on the project, Sara Lowes. Together, these pieces illustrate how the group created an iconic environmental installation.

The project was first pitched by Modern Art Oxford as an opportunity for local artists to ‘collectively explore new biodegradable materials and rate their potential to be used as a part of a tool kit for making art, [while] using scientific research from Wytham Woods to create an artistic response to climate change’. An emphasis on integrating art and science, as well as facilitating knowledge exchange among the collaborators and prospective audiences, immediately brought out an inquisitive, intellectual energy among the group. The group – Katalina, Janet, Claire, Angela, Maria, Clare, Heather, Morwenna. Helena, Lillian and myself – are all artists or creators and local to Oxfordshire.

The third meeting of the group took place at Wytham Woods, a historic research site managed by the University of Oxford since 1942 and the pre-arranged location for the installation. Here, the installation could reinforce the spirit of human experimentation, discovery, and knowledge already present in the woods. Nigel Fisher, Wytham's grounds manager, presented the exhaustive amount of climate-related research already taking place at this site. This inspired ideas to design a piece that, once situated amidst a backdrop of trees at Wytham, could prompt thoughts of greenhouse gas emissions, carbon sequestration, and atmospheric exchanges. The group’s philosopho-scientific approach to trees as the ‘lungs of the planet’ is reminiscent of the Gaia hypothesis. Proposed by NASA scientist James Lovelock and Lynn Margulis in the 1970s, they conceived of the earth as one interconnected, single-celled organism. From this perspective, oceans are our circulatory system, species are various organelles, and the atmosphere is our breath. Climate change could be imagined as a fever, symptomatic of some deeper homeostatic imbalance.

Continuing the theme of ecologically symbolic bodies, the group was introduced to the pre-selected material for the installation: mycelium. Mycelium are the root-like strands that branch below the earth and constitute the main body of mushroom networks, below the cap or mushroom ‘fruit’ we observe above ground. This organic substance is experiencing a surge in popularity among environmental science and sustainability buffs for its fascinating, foundational role among forest ecosystems (see RadioLab). Mycelium networks serve as a form of economic infrastructure through which trees can communicate and barter for nutrients. They also secrete important enzymes for decomposing surrounding organic matter (i.e. plants, animals, etc.), facilitating the cycle of life. As an artistic medium, mycelium brilliantly represents the exhibit’s overarching themes of the temporality and temperamentality of earthly phenomena, particularly when considering the implications of climate change.

Plied with souvenirs from Wytham and a ‘playground’ space in MAO’s empty basement, the group began to experiment. We developed a pattern of going off on our own, testing out various skills, conceptual approaches, and biodegradable materials, then returning to the basement to debrief either with photos or physical models of the materials. This pattern reinforced how important it was to test out different methods, with new creations crafted out of mud, mycelium, and other curious substances being brought down into the basement each week. A sustained interest in carbon, trees, and respiration developed into the idea of moulding human appendages, specifically hands and lungs. Bricks were also proposed as an avenue for representing scientific data linked to greenhouse gas emissions and climate change, while alluding to the anthropogenic industrialisation of the environment. 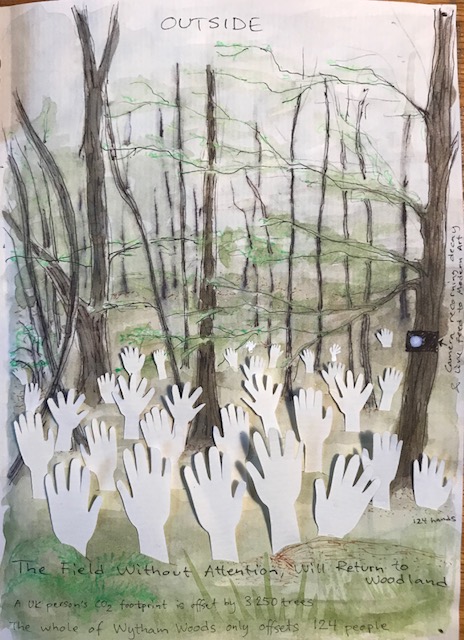 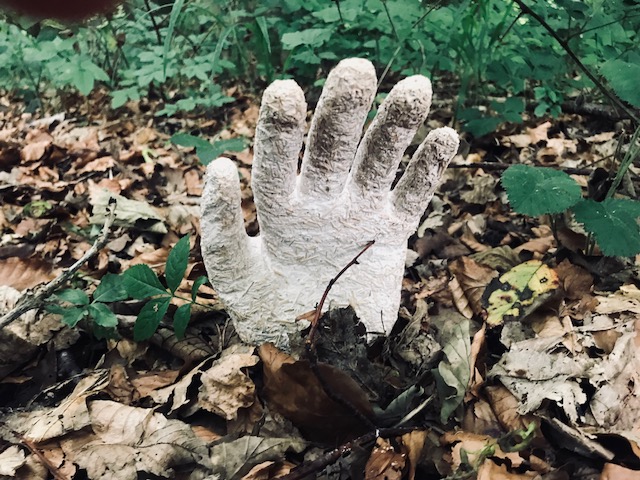 Weeks went by and ideas, along with new materials, were proposed, explored, and rejected. Gradually these elements converged. This process was influenced largely by time pressure, group dynamics, the artists who attended most frequently, the quality of models developed, and the personalities of those proposing the ideas.

‘I had designed my clay model of the lung-form specifically with process in mind. The group would cut and shape the bricks to “fit” with one another, similar to stone wall builders processes or how the Anagama Kilns in Wytham were made. For me, the process of making was just more important for the artistic essence of the work than the final work itself and symbolising the collaborative nature of the piece.’

Many models or ‘studies’ were developed over the course of this phase. I found this process fascinating – such massive effort and creativity went into developing each model. What seemed superfluous to me at first, after watching Lillian Tranborg cut over a hundred miniature bricks out of mud from Wytham, was incredibly effective at demonstrating the group’s ideas in a physical form. The incompatibility between architectural feasibility and the foundational inspiration for the piece made way for alternative approaches. When metal rods were proposed as a substitute to willow for the body of the piece, concerns were immediately raised as to whether metal could effectively represent the ‘natural’ essence embodied throughout the installation.

I challenged the group with the question: ‘what makes metal, and human construction or involvement for that matter, unnatural?’ This prompted a rich discussion regarding the pervasive binary of natural versus unnatural, in which humans, culture and technology are often classified as ‘unnatural’. The artists reinforced that the installation was about disrupting common conceptions and emphasising the multiplicity of human relationships with climate and the environment. Furthermore, the artists appreciated that the metal would be left alone standing in the woods long after the mycelium bricks had decomposed, much like the bones of a human skeleton. 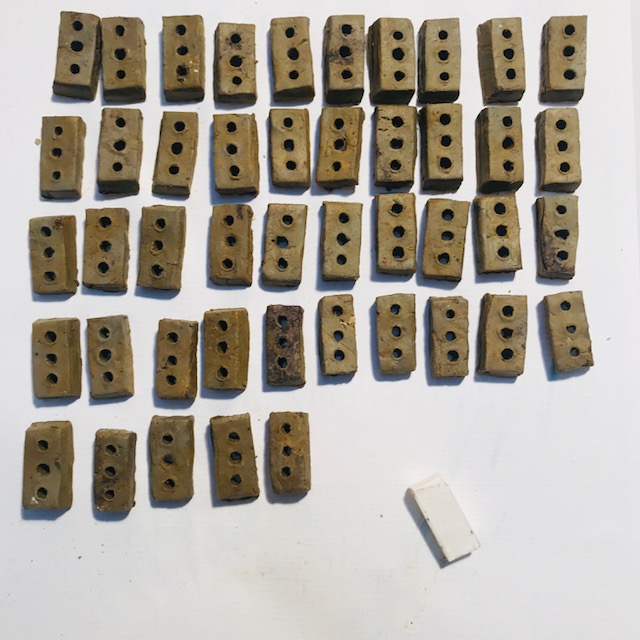 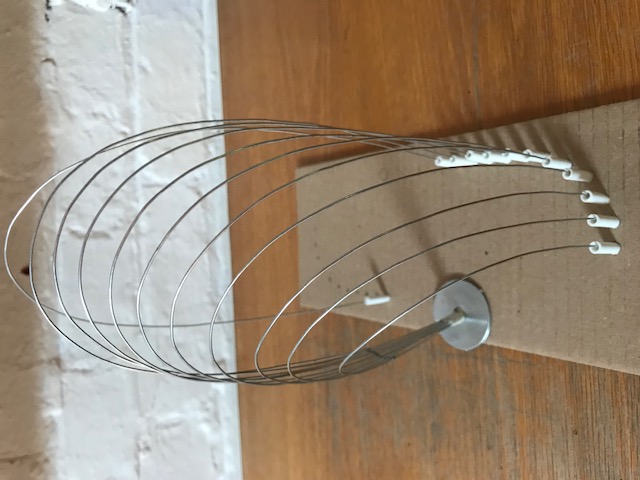 The Infrastructuring phase was laborious, monotonous, and yet curiously enjoyable. I looked forward to my afternoons spent crunching up mycelium so it could be re-moulded into bricks. Each Tuesday, the basement would quickly fill with the damp, musty scent of mushrooms. The mycelium had been shipped from a distributor from the Netherlands, arriving in the form of a mulch. The material is temperamental – as a living entity, it was not immune to the influences of temperature, humidity, and light. Sara described it as though she was “looking after a pet.”

We spent hours breaking up the mycelium that had already begun to cohere, while reflecting on this phase of the process as our ‘birthing’ of the piece. Angela Edwards compared the labour to peasants preparing oats for baking. At times it seemed almost tribal or ritualistic, facilitating a camaraderie and kinship amongst the group. I felt bonded to these women and the installation. Ideas moved from my mind through my hands, mixed in with mycelium that got wedged beneath my fingernails, dusted over my skin in a thin powder, and lingered in my nostrils.

On Tuesday the 28th August, a portion of the original group, along with the MAO staging crew led by Scot Blyth, Wytham staff, and several volunteers, arrived at the woods to install the piece. Prior to installation, the team carried out a risk assessment and laid out their initial plan for threading the bricks onto the pre-built steel skeleton. 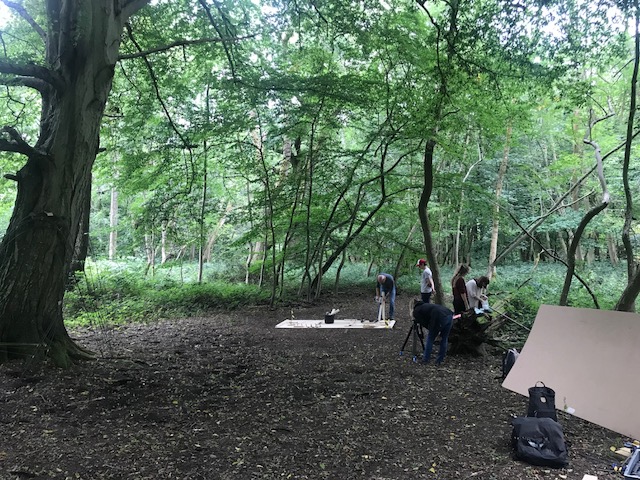 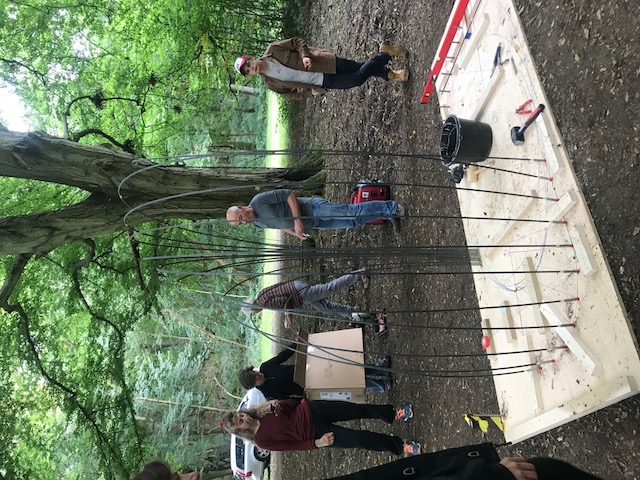 The first attempt at threading the bricks onto the steel rods failed. It took the group of ten artists and volunteers at least three tries before they collectively established the best way to thread each brick through the rods. Once they found this rhythm, the team was able to finish ‘threading’ the second half of the installation in less than twenty minutes. This part of the process was both delicate and intense. The group celebrated with prosecco, and expressed their pride and gratitude over the culmination of their work. The exhibition would open just two weeks later.

On Friday September 22nd the gallery was buzzing with art and environmental enthusiasts. Subtle sounds arranged by Eric Clarke played through four speakers and a lone white bench sat at the centre of the bare room just off of the main gallery. A digital projection of the installation was displayed on one of the walls.

I spoke with several of the other artists at the exhibit who expressed their excitement and criticisms. Like them, I felt much was missing from the digital display. We originally intended to set up a live feed in the woods to transmit footage the installation in real-time and establish a virtual tether between Wytham and MAO. This was later determined to be too much of a technical challenge.

The underwhelming digital display seemed to mirror many contemporary interactions with information about climate change and the environment. When we scroll through Facebook and Twitter, or watch the news or YouTube videos, we are exposed to dramatic, yet detached representations of nature threatened by a changing climate. Getting involved in the development of this piece required me to engage with human-climate parallels, such as respiration and decaying organic matter, in more holistic, sensory-based ways.

Encouraging opportunities to explore climate change in physically creative and playful ways can disarm climate change and its repercussions, while making them more tangible. Furthermore, engaging with these concepts as a group allows for collective experimentation and evolving perspectives. By the time this article is published, the exhibition at MAO will have concluded. Luckily, the installation (literally) lives on at Wytham Woods. Go smell it, walk through it… touch it if you dare. Join the process and become a continuing body. 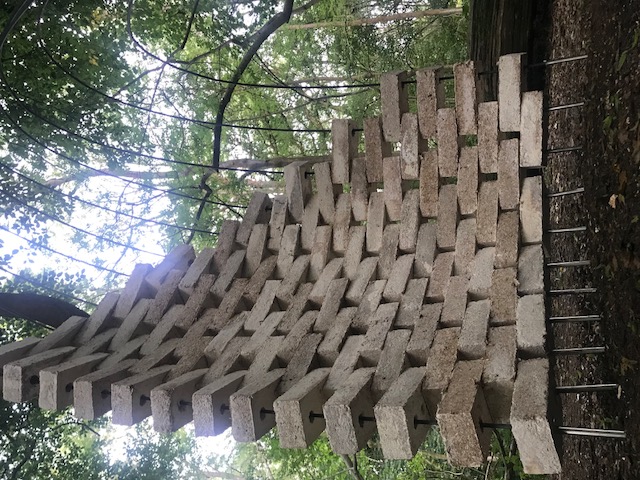 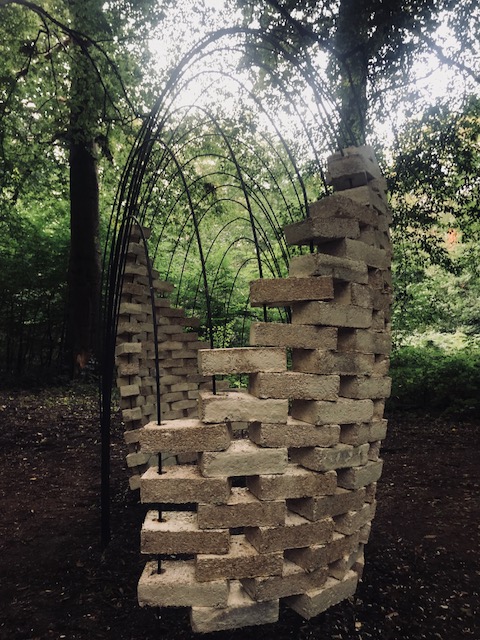 For instructions on how to visit Wytham Woods, please visit: https://www.wythamwoods.ox.ac.uk/permit

If you like what you've just read, please support Anthroposphere by buying one of our beautifully designed physical copies here. All proceeds go towards printing, designing and maintaining our publication, and your contributions will help keep our climate journalism interdisciplinary and accessible for all.

The Changing Face of Environmental Litigation